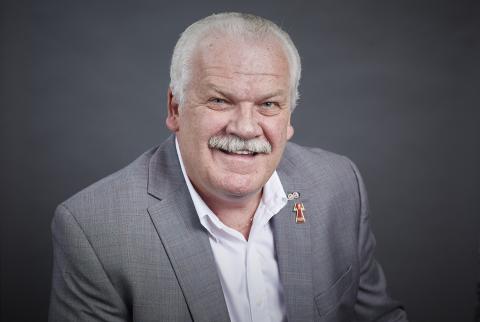 Chris Aylward was elected as the National President of the Public Service Alliance of Canada at PSAC’s 18th National Triennial Convention in May 2018. He previously served as PSAC’s National Executive Vice-President from 2012-2018.

Born and raised in Newfoundland, Chris has been an active member in PSAC for over 28 years. His involvement in our union started when he became a shop steward with Local 90000 - Union of Taxation Employees (UTE), at the St. John's Taxation Center.

In 1990, Chris transferred to Canada Revenue Agency (CRA) Headquarters in Ottawa, where he became active in Local 70000 - UTE. Chris played a major role in the 1991 General Strike as a communications officer for the National Capital Region (NCR).

In 1996, Chris was elected as UTE’s Alternate Regional Vice President for the NCR, and then became the full-time Regional Vice President (RVP) in 1997. During his 14 years as UTE’s NCR RVP, Chris spent many of those years as a member of the bargaining team. He helped to achieve important benefits and ground-breaking improvements for PSAC members working for CRA that were then negotiated for more of our members under other collective agreements.

Chris is a vocal advocate for the rights of all members to a safe workplace, a fair wage, and a strong collective agreement.