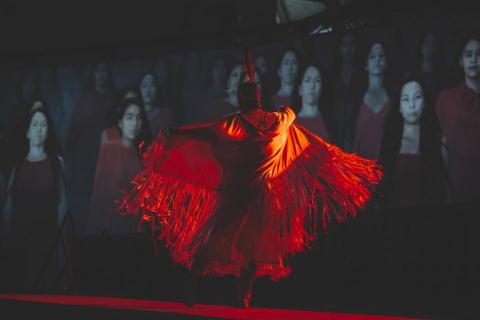 “This government must ensure that the Inquiry leads to justice and healing for all affected by this ongoing tragedy,” said Magali Picard, PSAC National Executive Vice-President. “ Indigenous women and girls, and their families, deserve answers. They deserve justice."

PSAC is calling on the government to focus on the following key considerations to ensure the success of the MMIWG Inquiry:

Show your support and take action

Stand in solidarity with Indigenous women and girls and show the government that you demand justice for them and their families:

“ I am wearing this pin in support of the Missing and Murdered Indigenous Women and Girls in Canada. They and their families deserve justice. #MMIWG @JustinTrudeau @psacnat”

Jaime Black, a Métis artist, launched The REDress Project in 2014. The installation art project involved collecting and hanging 600 red dresses symbolizing the hundreds of Indigenous women and girls whose lives were stolen.

PSAC’s National Indigenous People’s Circle and National Human Rights Council Indigenous Working Group have partnered with Jaime Black to develop the Red Dress Pin in solidarity with all the Indigenous women who have been a victim or survivor of violence.

The Native Women’s Association of Canada (NWAC) began drawing attention to the issue of violence against Indigenous women in 2005. They assembled a database on 582 missing and murdered women and girls.

In response to numerous calls for action from organizations such as NWAC and the Canadian Feminist Alliance for International Action (FAFIA), the Government of Canada launched an entirely independent National Inquiry into Missing and Murdered Indigenous Women and Girls (MMIWG) in September 2016.